If Colin Kaepernick had given black-power salute, would his critics be happier? 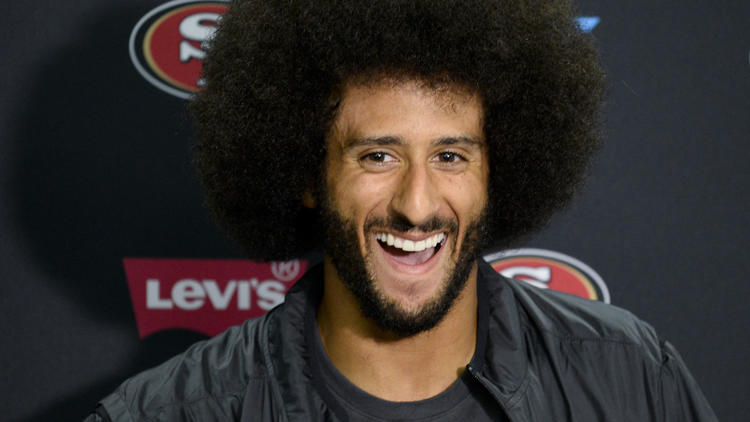 (Orlando Sentinel) I prefer standing and placing my right hand on my heart during the national anthem, but I support Colin Kaepernick‘s decision not to do so.

To argue otherwise would be to deny one of our most sacred democratic and constitutional principles: freedom of expression. It is a fundamental right.

Kaepernick, the 28-year-old San Francisco 49ers quarterback, is highly intelligent. He also is courageous, deeply patriotic and charitable. Kaepernick regularly engages in significant work for disadvantaged kids. He is passionate about helping medically challenged children with heart disease. How charitable are his critics?

So what’s the hullabaloo about? Standing for the anthem is a sociocultural norm like racism that Americans can freely choose to associate or not. So why is Kaepernick being treated like a rebellious slave in need of plantation-style discipline?

At nearly every sporting event, there are a wide range of behaviors on display during the national anthem. Fans sit, talk, eat, belch, spit, wear hats, and place their hands in their pockets during the anthem. Kaepernick’s “rebellion,” as such, is good for America. It forces us to discuss uncomfortable American-made problems such as racism, bigotry and xenophobia. Those evils come wrapped in a malaise of inequality, injustice and apathetic denial.

Kaepernick is not anti-American. He is a patriotic anti-inequality, anti-racist and anti-injustice human-rights activist. Unlike many Americans, he actually believes in William Tyler Page’s “The American’s Creed,” which was adopted by the U.S. House of Representatives on April 13, 1918.

The American’s Creed embraces a “government of the people, by the people, for the people” as consented to by the people and based on “freedom, equality, justice, and humanity.” While many Americans lack empathy toward the poor, downtrodden and disenfranchised, Kaepernick feels deeply compelled to advocate for them. What if more NFL players shared his moral fabric?

In the wake of the tragic Dallas massacre, whose response to police brutality and structural racism would you want disgruntled African-American men and youth to follow: Kaepernick’s or Micah Xavier’s, the gunman?

Kaepernick was born to a 19-year-old unwed white woman and a seemingly uninterested African-American father. When he was five weeks old, he was adopted by two loving parents, Rick and Theresa Kaepernick, who happened to be white,

I wonder whether Kaepernick’s mulatto heritage, wealth, good looks, status and intimate understanding of white culture are what really bother the self-professed protectors of “The Star-Spangled Banner”?

I wonder whether Kaepernick’s close proximity to whiteness makes some feel betrayed by his ardent pro-black stance for nonviolence, freedom, equality, justice and humanity?

I wonder if he were two shades darker and raised by a single black mother, what might his critics say? The intoxicatingly toxic debates about President Barack Obama’s racial heritage and patriotism echo here.

Kaepernick continues the black sports tradition of nonviolent human-rights activism, which represents the sentiments of millions of Americans.

The hateful reactions to his peaceful civil disobedience are the best evidence that we must continue the long walk to freedom. Need I remind you that former NBA sensation Mahmoud Abdul-Rauf was suspended in 1996 for refusing to stand during “The Star-Spangled Banner”? Or what about the expulsions of Tommie Smith and John Carlos after giving the black power salute while receiving medals in the 1968 Olympics in Mexico City?

I wonder: Would Kaepernick’s critics be happier if he stood quietly and gave the black-power salute, as Smith and Carlos did, during the national anthem?

History dictates that it is easier to vilify human-rights messengers than constructively engage their messages. No one has accused Kaepernick of making erroneous or false claims.

At its core, Kaepernick’s message is one of racial unity, peace, justice and equality for all. If we demonize nonviolent and peaceful messengers because we disagree with them, what value does The American’s Creed hold?

Jeremy I. Levitt is the distinguished professor of international law at Florida A&M University College of Law and author of “Black Women and International Law” (Cambridge University Press, 2015).